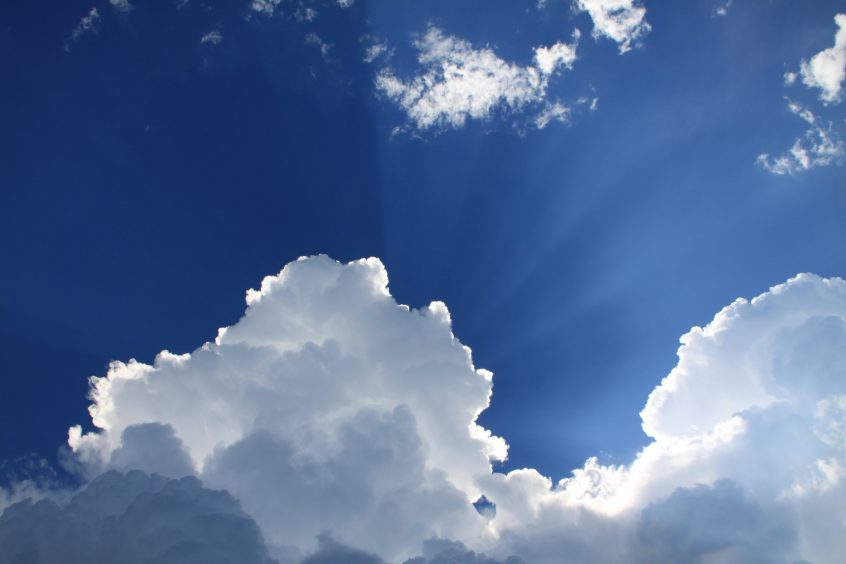 What does ‘blue sky thinking’ sound like? What voices do you need to put it into practice?  What indeed does this particular piece of ‘management-speak’ actually mean?

Let’s look at how to facilitate blue sky thinking.

‘Blue sky thinking’ is one of those easy-sounding turns of phrase which come up in organisational life, but which are not always clarified sufficiently for people to understand what is expected, when they are asked to do it.

What is the ‘blue sky’ metaphor meant to convey? Lucid? Bright? Fresh? Unencumbered? All of the above? Or is it a peculiarly British expression reflecting the notorious British weather? Is it simply an exhortation to get away from patterns of thought that have become familiar, grey, dull and downcast?

Let’s assume that it’s a call for thinking that might be different from the prevailing norms in any of these respects, that is new and unfamiliar, unclouded by presuppositions or habitual tendencies, offering a longer and clearer view of things, somehow uplifting and energising in its impact. What sort of talk is like this? What types of conversation generate thinking that has these characteristics?

It’s probably easier to identify the ones that don’t. In that respect the first and biggest obstacle to blue sky thinking lies in the habitual nature of our patterns of thinking and talking. This is an obstacle in three ways: first, because these habits have a very strong grip; secondly, because we’re largely unconscious of them; and thirdly, because while we all have strong habits of thinking, our individual patterns can be very different.

We all have our own distinctive individual profiles of ‘voices’ which shape and constrain how we think and talk. Unless and until we become aware of these tendencies and patterns, there is little any of us can do to break through into the blue sky that might lie beyond. But even when we learn how to recognise and manage our own patterns of thinking, we face the challenge of what happens when we encounter other people’s.

This is where blue sky thinking is most commonly called for, in group work, in conference and discussions. Yet this is exactly where habitual, unconscious and diverse patterns of thinking are most likely to collide. In theory, diversity is a source of creativity. In practice, it is more commonly a source of tension. The immediate effect of bringing a collection of different patterns of thinking and talking together is more commonly to produce a gridlock of competing approaches rather than the emergence of a shared new perspective.

Cognitive scientist David Perkins of Harvard University has pointed out that human thinking is characterised by four default tendencies. [Note 1] It tends to be hasty or largely automatic rather than mindfully deliberate. It tends to be narrow, in the sense of following familiar, well-worn mental paths. It tends to be fuzzy, meaning approximate or only loosely articulated rather than precise. And it tends to be sprawling or disorganised rather than systematic. In the general course of events we let our minds go from one thing to another, as they will, rather than applying them in disciplined or methodical way.

Default thinking is not a problem in itself. Actually we have these tendencies because they are useful in terms of ‘cognitive economy.’ In plain English, they save on the expenditure of mental effort. That’s helpful, if we’re busy, as most of us are, with many things competing for attention and for our limited reserves of mental energy. However, default thinking is not merely less useful but becomes a major obstacle to progress when we need to raise the quality of our thinking to a new and higher level. Which we need to do, when we find ourselves confronted by issues, challenges, problems or opportunities that are not simple, routine or familiar, but complex, novel, shifting and open to interpretation.  And these, of course, are precisely the circumstances in which we hear calls for ‘blue sky thinking.’

And there is an added sting in the tail of default thinking. While we are all individually and in our own idiosyncratic ways prone to be hasty, narrow, fuzzy and sprawling in our thinking, put us together in a group and the impact of these characteristics tends to be amplified rather than reduced. Reflect on your own experience of meetings and I think you’ll recognise the tendency. Thinking, and its manifestation in dialogue, typically becomes hastier, narrower, fuzzier and more shapeless rather than more patient, more broad-minded, more exact or more carefully organised. This is why group discussions, especially perhaps those in pursuit of the elusive blue sky thinking, can so often end up amounting to less rather than more of the sum of their individual contributions.

So what’s to be done?

At a headline level the answer is obvious, although seemingly paradoxical: you need to take an organised approach to generate the creativity of blue sky thinking. Otherwise the combined forces of cognitive tendencies that accent speed and efficiency over novelty and habits that reflect personal diversity keep thinking and talking, both individual and joint, stuck in the grip of existing patterns – the grey skies of normality.

To be more precise, blue sky thinking needs to be pursued through a particular type of organised conversation, and this means a conversation which uses specific voices in an unusually deliberate way. Since the objective of blue sky thinking is to discover new, longer, wider views of things, then exploration is the priority. In VoicePrint terms this means using the voices of Inquire, Probe and Diagnose. ‘How else could we think about this?’ ‘What happens, if we start by identifying and then questioning our most basic assumptions?’ “What’s the most unexpected connection we can find between these things?’

You might be thinking that this is simply the process that used to be known as ‘brain-storming’ before someone decided that the phrase might be offensive to people with mental illness. Let’s agree that no offence is intended and confirm that ‘brain-storming’ is a route into blue sky thinking. But let’s also recognise that the problem with many ‘brain-storming’ sessions is that they don’t actually use the exploring voices. I’m not simply referring here to the familiar difficulty caused by premature critiquing, which can stop creativity in its tracks. I’m highlighting the more common, but less frequently recognised, problem that most ‘brain-storming’ uses the wrong voices in the first place.

What ‘brain-storming’ tends to do is to make a lot of use of the positioning voices, especially Advocate and Advise. Participants don’t so much pose and pursue questions as to present ideas and propositions. These can be unorthodox, imaginative and potentially creative, but the positioning voices tend to produce thinking that is isolated, individualised and free-standing. The exploring voices tend to produce trains of thought which not only go further and deeper but also encourage people to think collaboratively. Without sufficient, sustained exploration, you never get to blue sky thinking. What you get instead is an over-abundance of orphaned brain-children and an absence of shared parenting.

Genuine blue sky thinking needs to open up new avenues of thinking and then to pursue them in an open-minded way. It needs a conversation which draws on curiosity rather than on knowledge or experience. It needs people to take part in a spirit of finding out, which takes time. It needs us to be willing to be surprised and to put our habitual ways of thinking and talking to one side, while we figure out stuff that hadn’t occurred to us previously and see where these things might lead. It’s a journey into the unknown and as such two open minds are better than one. Exploring is facilitated by helping each other to question, notice and connect.

Of course exploration alone is not enough.

Blue sky thinking is seldom if ever undertaken purely for its own sake. The objective is to bring it to bear on a particular issue, challenge, problem or opportunity, either to look at these in a new way in order to arrive at a better sense of how to proceed or to identify other issues, challenges, problems and opportunities that had not previously been recognised. Either way, blue sky thinking is purposeful. Other voices are needed to make it fit for purpose, most notably the Articulate voice to capture it and the Evaluate voice to evaluate it.

But these are secondary phases. If we want to generate blue sky thinking to articulate and evaluate, we first have to make our conversations much more exploratory than they usually are.  Download our Facilitator’s Guide to generating Blue Sky Thinking PDF.  It’s a framework of the four phases you can use to facilitate Blue Sky Thinking in your organisation.